Have your old batteries stopped holding a charge? Do you get only a few minutes of runtime? Don’t give up on your favorite tools just because the Ni-Cd batteries have died. Give them new life with Lithium-Ion batteries. They are lightweight, and they hold a charge even if you don’t use them for a while. Check out these two 18-volt replacement batteries from DeWalt and see which one is best for you. 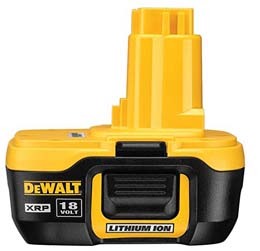 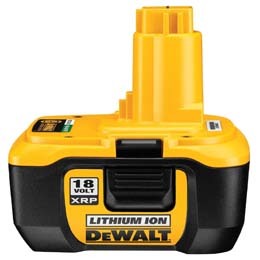 Before we begin, there are twoimportant details that you need to know. First, both the DC9180 and DC9182 batteries described here work in almost all of the DeWalt 18V XRP tools, even if they originally used Ni-Cd batteries. The only exceptions are the DC212 hammer drill, DW908 flashlight, DC527 fluorescent area light,DC500 vacuum, and theDW073 rotary laser. Second, you can recharge these batteries with any one of these three chargers: DC9310, DC9320, and DC9319 in-vehicle charger. All three chargers are dual-chemistry, which means they fill both Ni-Cd and Li-Ion batteries from 7.2V to 18V.

Now, on to our first replacement battery, the DC9180. It’s slightly larger and heavier than the DC9182 below, but if you compare it to a Ni-Cd, you’ll notice a big difference in weight. That’s one of the advantages of lithium batteries—they are light. This one weighs about 1.5 pounds.

Li-Ion also holds most of its charge even when stored for months. You don’t have to leave the batteries on the charger to have them ready for your next project.And don’t ever worry about charging them too often. Lithium batteries do better if they sip power on the charger during your breaks than if you run them all the way down every time. The average lifetime of this kind of battery is three to five years, or about 2,000 charging cycles.

On the downside, Li-Ion is sensitive to heat. You may have noticed that rapid chargers have a cool-down period so the batteries don’t get too hot. It’s a very bad idea to leave these kinds of batteries in a hot truck cab for hours. You’ll end up having to replace them sooner.On the upside, the DC9180 can tolerate working in temperatures below freezing. Not that you really want to work in 20° F, but it happens.

As we mentioned above, the DC9182 battery works in almost all of the DeWalt 18V XRP tools, even if they originally used Ni-Cd batteries. The only exceptions are the DC212 hammer drill, DW908 flashlight, DC527 fluorescent area light, DC500 vacuum, and the DW073 rotary laser. You can recharge the DC9182 with any one of these three chargers: DC9310, DC9320, and DC9319 in-vehicle charger.

If you compare the DC9182 to the DC9180, you’ll notice that it’s about 8 ounces lighter and about a third of an inch shorter and smaller. That means it weighs just one pound. That’s less than smaller-capacity 12V Ni-Cd battery. Pop the DC918 into your drill, pick it up, and marvel at how light the drill hassuddenly become.

Li-Ion batteries like the DC9182 will still run your tools in below-freezing temperatures, and they hold their charge even when stored for months. They don’t have memory so you can recharge them as often as you need before running them all the way down. In fact, they’ll last longer if you don’t run them till they are completely dry.

There’s some confusion about whether DeWalt is discontinuing the DC9180 and replacing it with the DC9182, but as of writing both were available on DeWalt’s website.

Both of these batteries make for a lighter-weight, longer-running replacement for DeWalt’s XRP 18V Ni-Cd batteries. The difference between them is merely their weight and size.

If you prefer the lightest-weight, most compact battery you can get, choose the DC9182. It’s half a pound lighter than the DC9180, and it’s about 1/3-inch smaller.

Otherwise, if size just doesn’t matter, we bet price will. Watch for the best deal on either battery.