Do you need a battery upgrade? Or spares to swap out on big jobs? DeWalt offers these two batteries that will dramatically increase your runtime between charges. Let’s look at them both and see which one will be the best for you. 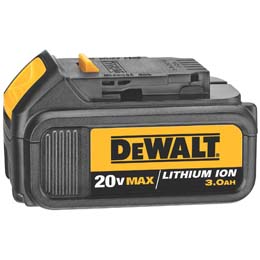 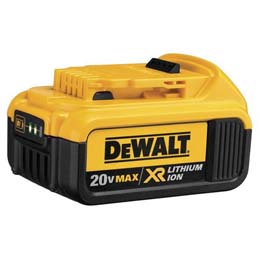 If you’re running a power tool off a Ni-Cd, a NiMH, or a lower capacity Li-Ion battery (like the stock 1.5Ah that come with a lot of cordless tools), you’ll see a big difference with this upgrade! The DCB200 has 3.0Ah of power and it’s compatible with all 20-volt DeWalt MAX cordless tools. Go ahead, put it in your impact driver and sink 100 screws without recharging. You’re going to love the long runtime you’ll get! (If you want even longer working time, see the DCB204 below.)

Although the DCB200 is rated for 3.0Ah, that doesn’t mean it will run a power tool for 3 hours. It depends on the current that the tool draws to operate. For example, a drill might use 2 to 3A. That’s why you might only get 15 to 20 minutes of work out of a 1.5Ah battery. Now you can see how a 3.0Ah battery runs for longer. You could work with a drill for around an hour straight with it.

Since it’s made of the lightest metal on the planet, lithium, it weighs just 1.42 pounds, and that’s less than even lower-voltage Ni-Cd batteries. Some of the other great features oflithium-ion batteries include no memory, and very little self-discharge. Translated, that means this type of battery can be charged whether it’s run all the way down or not, and it doesn’t lose power while it’s off the charger, waiting to be used. If you need to store it for longer than 30 days, leave it with about 40% full.

While you’re working, the LED fuel gauge on the end shows how much charge is left so you’re not caught off guard with a dead battery. Although a charger is not included with it, the DCB200 can be charged with both DCB101/102 and DCB106 chargers. It takes about an hour to refill.

More features of the DeWalt DCB200

If the idea of longer runtime has you salivating, take a look at the DCB204. With 4.0Ah of power inside, it runs up to 33% longer than the DCB200. It’s part of the Premium XR lineup, but it’s still compatible with all 20-volt DeWalt cordless tools. The XR circuitry protects both the battery and the tool by monitoring the cells inside the battery, and it gives it maximum runtime.

Like the DCB200, this battery has an on-board fuel gauge. The 3 LEDs light up to show you how much charge you have left. Once it’s empty, it takes about 70 minutes to recharge for the next round. Fill it up again on the DCB101/102 or DCB106 DeWalt chargers.

Lithium-ion batteries are lighter and smaller than their Ni-Cd and NiMH counterparts.For example, a 20V Li-Ion weighs less than a 12V Ni-Cd battery. They don’t suffer from the memory effect like Ni-Cd batteries do, either. This means they can be recharged whether they are empty or not. They work well even below freezing, but need to stay out of extreme heat. The average lifetime is about 2,000 cycles, or charges, or about three to five years of regular use.

More features of the DeWalt DCB204

Since both of these batteries are compatible with all DeWalt 20V MAX cordless tools, the choice comes down to runtime.

If you want 3.0Ah of runtime, get the DCB200. That will keep your drill going for about an hour.

If you want to go even longer between charges with 4.0Ah of runtime, get the DCB204.