Let’s face it, your cordless tools will probably outlast their batteries. Generally, nickel-cadmium batteries last up to 1000 cycles, or about three years of daily recharging. Are you in the market for replacement batteries? Or do you just want some extras to swap out so you don’t need to stop in the middle of a project? Let’s look at these two battery models from DeWalt and see which one meets your needs. 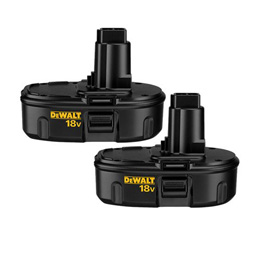 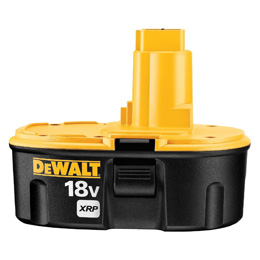 The DC9096 has a capacity of 2.4Ah, or ampere-hours. This is more than the DC9099 that we’ll discuss later in this review. An independent reviewer tested the DC9096 against the DC9099 with both of them used to run a cordless drill. Although both drilled 52 holes per amp-hour, the DC9099 completed 88 holes versus the DC9096 that completed 121 holes total. The DC9096 lasted longer since it has the larger capacity. This is logical with nickel-cadmium batteries. Ni-Cd batteries tend to put out full power until the end of their discharge cycle. Ni-Cd batteries are also the only rechargeable batteries that actually benefit from a complete discharge.

DeWalt states that their XRP line of batteries replaces the earlier X2 lineup and will run up to 25% longer. In case you’re wondering if your charger is compatible, the DC9096 can be recharged with the older DW9116 model as well as the newer DC9310 and DC9320 models. The DC9310 or DC9320 charge the DC9096 battery in an hour or less. The rapid charging time is possible because Ni-Cd batteries don’t heat up as much. Of course, the ideal temperature for charging is above 40 degrees and below 105 degrees F.

The DW9096 comes by itself but is covered by DeWalt’s excellent warranty. If you’re replacing a worn-out battery, please recycle. Cadmium is a toxic heavy metal.

This is a pack of two batteries containing the DC9099 model. It’s a slimmer, lighter battery model than the DC9096. It is also compatible with all DeWalt 18-volt cordless tools that use nickel-cadmium batteries.

The DC9099 is rated for a capacity of 1.7 ampere-hours (Ah). In the comparison test mentioned earlier, the DC9099 put out the same amount of work as the DC9096 per ampere-hour but it lasted less time overall on a single charge. Fortunately, nickel-cadmium batteries put out full power until they discharge completely, unlike other types of rechargeable batteries that cause a tool to run slower and slower until the battery is dead.

Since there are two batteries in this pack consider leaving the extra one always on the charger. Nickel-cadmium batteries lose 15-20% of their charge in the first day off the charger. The next day they lose 7-10% more. Then they discharge about 1% per day after that. If Ni-Cd batteries are stored for too long without being used they form dendrites, or internal connections, between their contacts that will cause a short-circuit. The DeWalt Ni-Cd battery charger is made to maintain the DC9099 batteries in top condition, ready to go.

Batteries can be an expensive thing to replace, but it helps to calculate the cost per year of life. These nickel-cadmium batteries from DeWalt last up to 1000 cycles, which could be three years or more of daily recharging. Leaving the batteries on the DeWalt charger will prolong their life too.

If you need more than one replacement battery for your 18-volt DeWalt cordless tools, go with the DC9099 pack of two. But keep in mind that the DC9099 has less capacity and therefore less runtime on a charge.

If you need just one long-lasting battery, go with the DC9096. Its superior 2.4Ah capacity will keep it working longer between charges and it can recharge in an hour or less.

Click here to Check out DeWALT DC9099 Price on Amazon!

Click here to Check out DeWALT DC9096 Price on Amazon!