Magnetic stripe cards are useful for many tasks besides banking. Hotels use them for door keys, companies use them for tracking time, clubs use them as membership cards, public transit uses them for tickets, libraries use them for checking out books. If you’re looking for your own mag stripe reader, let’s take a look at these two models from Deftun to see which will be the best for you. 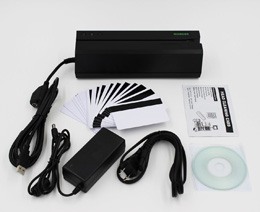 The Deftun MSR605 is typically less expensive than the MSR606 described below. Neither one is HID; they both require drivers to be installed on a PC in order to communicate with the computer. Although the MSR605’s instructions say it’s only compatible with the Windows operating system, some users have had success with Mac and Linux running emulator software like Parallels and Wine.

The MSR605 uses a serial connection over USB and proprietary software to read magnetic stripe cards and write to them. It can read and write both high coercivity and low coercivity cards, from 300 up to 4000 Oe. That means it can access data for credit cards, hotel door keys, and transit passes.

It can view and record to all three tracks. Track 3 is rarely used, but Tracks 1 and 2 are commonly used for commercial banking cards. You can practice on the twenty blank cards included in the box.

Besides the USB interface, you’ll need to power the MSR605 with the included 9V power adapter. It’s rated as drawing 2A of current, a little less than the MSR606 below. 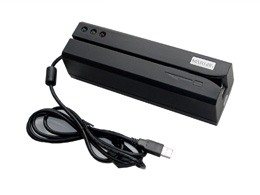 The Deftun MSR606 is said to be the professional version of the MSR605. While the manufacturer says the MSR606 can read and write to Driver Licenses, the MSR605 isn’t always advertised as having this ability. The only other difference we saw is that the power adapter included with the MSR606 draws 24V, considerably more than the MSR605.

Like the other card reader/writer we described above, the MSR606 can read and write data on both low and high coercivity mag stripe cards. It comes with a blank test card so you can practice with it.

The included CD contains a driver and software that’s compatible with Windows 98/Millenium Edition/XP/Vista although some users report that they’ve been able to use it with Windows 7 and 10 and even other operating systems running emulator software. Your mileage may vary.

The MSR606 accesses all three tracks in one swipe on a magnetic stripe card. Its reported error rate is pretty low at less than 0.5% for reading and less than 0.8% on writing. The coercive force ranges between 300 and 4000 Oe, depending on your need. The typical bit per density on all three tracks is 75/210bpi.

If you have a small business, one of these two card reader/writers might be just what you need to manage tasks like access control, time tracking, and data collection. With over a million swipes before head failure, they should last you a good long time.

Hobbyists may love having their own mag stripe reader/writer for hacking projects like home door locks. The fact that these models offer both high and low coercivity is a bonus.

Choosing between the two models is a little difficult because they are very similar. The MSR606 is marketed to professionals while the MSR605 is not. The MSR606 is reported to be able to read and write to Driver Licenses, which may be a point in its favor. If you have a small business or might need to read Driver Licenses, consider getting the MSR606.

If you are getting a card reader/writer for personal use, you may save money by purchasing the MSR605 instead.