Paslode has been in business since 1935. They manufactured the world’s first cordless power nailer in 1986.

Tired of setting up a compressor and dragging around a dirty hose? Paslode has solutions for you.

Both of these nailers are model CF325. Let’s discuss their specifications and differences so you can choose the one that’s right for you. 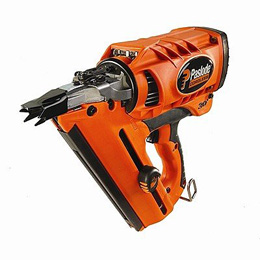 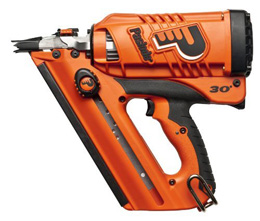 Makesframing and decking faster and easier

Imagine driving nails with no hammer, no hose and compressor…That’s what Paslode has done with this cordless framing nailer. It usesinternal combustion to hammer nails. The combustion comes from a can of fuel and a battery that are loaded into the nailer.

The nailer can sink a 3-1/4-inch nail into LVL pressure-treated wood in less than a second.In fact, Paslode claims it is possible to drive 2 or 3 nails a second.

The nails come in magazines of 48 and the nailer holds one magazine at a time. The buttons and latches to load the fuel, the nails, and the battery are large enough that a person wearing work gloves can easily manipulate them.

The measurements of the nailer are 14-1/2 x 12 x 4 inches and it weighs 7.5 pounds. The nail angle is 30 degrees and it can toe-nail at any angle. Depth adjustment is tool-free and can also be done by a person wearing gloves. There is a nail lockout to stop blank fires.

Paslode recommends cleaning the nailer every 6 months or after 50,000 nails, whichever comes first. They even put a 5/32” hex wrench in the kit to make it easy to disassemble the nailer.

Some possible cons are the accessories and the nail size limits. Paslode accessories are needed for Paslode nailers. Other brands are not interchangeable. The fuel cells expire 21 months after manufacture. The nail shank diameter sizes range from .113 to .131 inches so they may not be regulation-size for framing in some places like California.

More nails on one charge

This is the new model of the CF325. It comes with a 7.4-volt lithium-ion battery. The new battery is lighter, lasts longer, and takes less time to recharge.

A convenient feature of this new Li-ion battery is that charging it for only 2 minutes makes it possible to drive 200 nails. It only takes one hour to charge instead of two.On a full charge it hammers in up to 6000 nails, 2000 more than the older model.

Other specifications remain the same as the older model, including the cons mentioned above.

The newer 902600 model with the Li-ion battery will drive in more nails on one charge than the 902200 model will, and it recharges more quickly. If the charge runs out when there’s only a little nailing left to do, the battery can recharge for just a few minutes and the nailer will be working again. This model is ideal for frequent users and those working sites without access to electricity.

For someone who has smaller jobs or does framing and decking less often, the 902200 is more than enough power.