When you’ve got interior cutouts or curves to cut you can’t beat a scroll saw. Scroll saws can make more intricate and smoother cuts than jigsaws. They’re a unique tool for fine woodworking and they can handle some metals and plastics too. A good scroll saw cuts well enough that the user doesn’t need to sand afterward.

The two scroll saws featured inthis article are ideal for sophisticated projects. Let’s see what they can do and which one is the best choice for you. 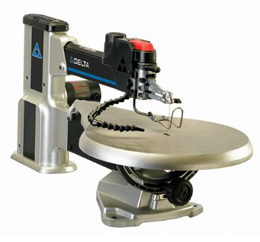 Delta has been a trusted name in the saw business for almost a hundred years. Recent changes in ownership and difficulty in getting parts for older machines made some long-term customers nervous about continuing business with Delta. But on the bright side, the 40-694 scroll saw is an updated model that arrived on the scene in 2014 and is fully covered by Delta’s five-year warranty.

The 40-694 is very similar to the DeWalt DW788. The much-loved feature that sets it apart is that the upper arm locks into position when it is raised for a blade change. There’s no struggling to hold it up with one hand or propping it up with a spare piece of wood. This allows the user to focus on the task of changing the blade or threading it through the work-piece for an internal cut.

The DW788 has beena favorite scroll saw for more than a decade. It’s good enough for pro users. Owners have been pleased with its low noise and practically nonexistent vibration. They love the tool-free blade changes. The blade tensioning lever is located right at the front of the arm along with the power switch and variable speed dial so users don’t have to reach far to make adjustments.

More features of the DeWalt DW788

It’s a tough choice because these two saws are very similar in ability and both have been popular choices for woodworkers and hobbyists. Either saw would be an excellent tool to add to a workshop.

The Delta 40-694 has one very user-friendly feature: the upper arm lifts and locks into place for blade changes and threading. Delta also offers a five-year warranty, the longest coverage between the two companies.

DeWalt offers a 90-day satisfaction guarantee making it low-risk to try their DW788. This model has had lots of positive reviews for over a decade. DeWalt also includes a couple of extras in the box: the hex wrench and blades.

Click here to Check out DEWALT DW788 Price on Amazon!