Bostitch offers two similar framing nailers, the F21PL and F21PL2. There is one key difference between them. Let’s look at their features and see which one will help you nail down your next project. 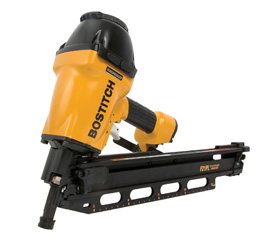 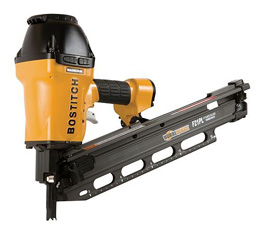 Bostitch showed off their new F21PL framing nailer. It garnered positive attention because of its ability to quickly change from shooting framing nails in wood to fastening connector nails in metal. The F21PL comes with two nosepieces that switch out without the use of tools. One nosepiece allows it to nail 21-degree plastic-collated round head framing nails. The other lets the gun drive 23-degree plastic-collated round head metal connector nails. The F21PL is a very flexible tool, eliminating the need to haul around an extra gun just to join metal.

Features of the Bostitch F21PL

Although the F21PL is thoughtfully designed and has nice extras, there are a few things it doesn’t have. It needs a ¼” NPT connector for the air hose and that does not come in the box. There is no dry-fire lockout or low nail warning. When using nails larger than .131” the user must remove the guide rod from the magazine. Fortunately, there is on-board storage for the rod.

The F21PL2 is the same nailer as the F21PL without the metal connector nosepiece. Let’s review the features available in this model.

Features of the Bostitch F21PL2

The F21PL2 requires a ¼” NPT connector for the air hose. The connector is not included in the box.Although there are not many complaints about this nailer jamming, if there is a jam, there is no tool-free way to clear it.

If you need the ability to drive metal connector nails, go with the F21PL. It comes with the extra MCN nosepiece. The nosepieces are easy to install on the nailer without using additional tools.

Otherwise, either gun will make a framing or sheathing job go a lot faster than one person hammering can do. Believe it—Bostitch rates their F21PL models for 100 nails a minute. A nailer like this is a great investment and time saver for a pro or a weekend warrior.

Click here to Check out BOSTITCH F21PL Price on Amazon!

Click here to Check out BOSTITCH F21PL2 Price on Amazon!