As an Amazon Associate I earn from qualifying purchases.
Home
Nailer Reviews
MAKITA AN923 vs BOSTITCH LPF21PL vs Freeman PFR2190 vs NuMax SFR2190 Review

A framing nailer saves time and effort when you’re building a deck, putting up a fence, or raising a roof. But when there are so many nearly identical nail guns for sale, it can be tough to shop for just one. That’s why we’re comparing four framing nailers to help you find the best one for your job. 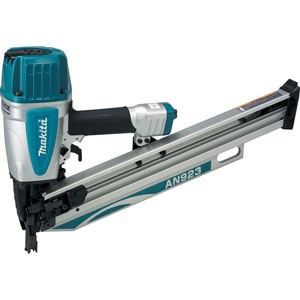 Makita makes a wide range of power tools with efficient and user-friendly designs. So it’s no surprise that their AN923 Framing Nailer has many pleasing features. For one, it comes with safety glasses, an air fitting, a retractable rafter hook, and oil for maintenance. That’s everything you need except for the nails.

As for nails, the AN923 accepts a variety of sizes between 2 and 3-1/2-inches long and .113 to .162-inches shank diameter. Those can be either wire or plastic collated, giving you more flexibility in what you want to use. When you’re down to the last three nails, the gun stops so that it won’t dry-fire. And the two-step loading system means you can reload in seconds.

Next, the nailer weighs 8.7 pounds, which is average for this class of tool. But it feels balanced and has a rubbery non-slip grip on the handle. And there are also rubber bumpers at key places like the end of the magazine, so you’re less likely to scratch a finished surface.

But the clawed tip of the AN923 helps you grip the wood better for toe-nailing. Plus, you can select the depth you want to set nails flush with the surface or countersink them. And the selector switch lets you choose between bump or contact firing, sequential nailing, or locking the nailer to avoid misfires.

As you work, the air filter keeps dust from entering the nailer. And there is an adjustable port that directs the exhaust away from the user. Finally, when you remove the hose, the built-up back pressure also clears out debris.

More features of the Makita AN923 Framing Nailer: 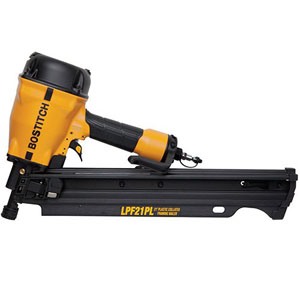 Second, the nail gun comes with a removable no-mar tip. That’s handy when you need to fasten finished wood that you don’t want to scratch.

Other than those two features, the Bostitch works with smaller fasteners than the Makita. It accepts 2 to 3-1/4-inch long nails with shanks that measure .113 to .148-inches in diameter. But it drives them in with 840 inch-pounds of pressure. And you can adjust the depth to countersink, too.

While you’re driving nails, you’ll need to stay attentive because there’s no dry-fire lockout like on the Makita nailer.

Finally, like most nail guns, you can choose between sequential or single fire or contact mode for rapid work. But unlike the Makita gun, you’ll need to swap the triggers. 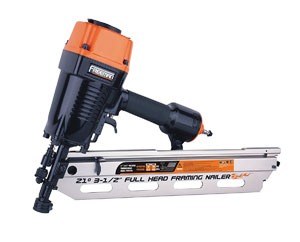 Freeman’s PFR2190 full-head framing nailer requires round-head plastic collated nails measuring between 2 and 3-1/2-inches in size. That’s the typical size range you’ll need for building pallets, installing sub-floors, and framing. And there’s a bonus feature of the Freeman nailer that not everyone knows about. Although it works best with 21-degree nails, it can handle 20 and 22-degree strips, too.

Like the Bostitch LPF21PL, there are two triggers that you’ll need to swap depending on whether you want to bump-fire or shoot single nails one at a time. And you can adjust the depth to countersink or set the heads flush with the surface.

As you move the nailer, the no-mar tip protects the wood from scratches. But the gun will stop working when there are only five nails left so you can reload more. The aluminum magazine holds up to 55 at a time, fewer than what fit in the magazine of the Makita nailer.

Although the body of the Freeman PFR2190 is made of magnesium, the total weight of the tool is 8.5 pounds, typical for this type of framing nailer. The driver blade inside is one continuous piece of hardened steel to stand up to years of service. And the cylinder consists of anodized aluminum with Teflon O-rings that never need oil. 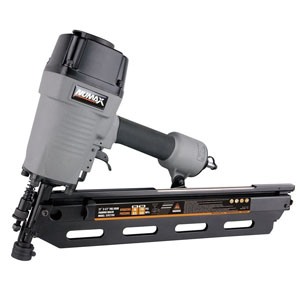 Our final pick is the NuMax SFR2190. Unlike the Freeman and the Bostitch, but similar to the Makita, this nailer has a dual-mode trigger. You won’t have to remove and switch the trigger to change from contact to sequential firing. That’s good news for owners who don’t want to carry around small parts that are easy to lose.

You’ll also find that the SFR2190 comes with a no-mar tip, which makes the nail gun useful for jobs beyond framing, too. And it’s easy to set the depth you desire by moving the dial with just one finger.

In other ways, the NuMax is similar to the Freeman nail gun. For example, it has an anti-dry-fire mechanism that stops the nailer when only five nails are remaining in the magazine. And although it officially accepts 21-degree plastic-collated round head nails, it also handles any generic brand from 20-22 degrees as long as they are 2 to 3-1/2-inches long.

And there are other similarities, too. It has a die-cast magnesium body along with oil-free Teflon O-rings in the cylinder. And at 8.5 pounds, it weighs the same as the Freeman nailer.

If you plan to buy a framing nailer for a one-off project like installing a deck, consider getting either the NuMax SFR2190 or the Freeman PFR2190. They are practically the same nail gun minus the trigger actuation. The advantage of the NuMax is the dual-mode trigger. Meanwhile, the Freeman comes with a 7-year warranty which is much longer than many brands offer on their framing nailers.

If you’re a contractor who occasionally needs a framing nailer, try the Freeman or the NuMax. If you work in tight spots, like among rafters or overhead, consider the Bostitch LPF21PL since it’s very compact and lightweight. Just keep in mind that it only accepts nails up to 3.25-inches long, and there’s no dry-fire lockout.

If you’re a pro that depends on their framing nailer, take a look at the Makita AN923, the Freeman PFR2190, and the Bostitch LPF21PL. First, the Makita comes with useful extras but does not have a no-mar tip. On the other hand, it wastes fewer nails as its anti-dry-fire lockout only kicks in when there are three nails remaining. Plus, it has a dual-mode trigger and holds up to 74 nails at a time.

Second, the Freeman comes with a no-mar tip but has an interchangeable trigger that you need to physically swap to switch firing modes. But it has a long warranty, and it’s compatible with generic nails between 20 and 22 degrees.

Finally, you might end up with more than one nailer since the Bostitch is also very handy for overhead work and fastening nails between rafters. Perhaps this nail gun will be your primary tool, with a less expensive nailer like the NuMax for occasional tasks.