When you install sub-flooring or put up a deck, your job goes a lot easier and faster with a framing nailer. But there’s a lot of competition in the tool market, so choosing between rivals can be tricky. That’s why we’re going to review two popular nail guns to see which one is the best for you. 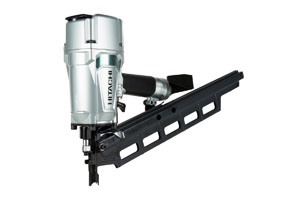 You’re likely to see the Hitachi NR83A5 nailer at a lot of construction sites. Framers who install wall sheathing or build up windows find it convenient and reliable. And roofers like it, too. It’s a simple tool that does what it needs to with no extra frills.

To start, the NR83A5 weighs either 8.8 pounds or 9.1 if you mount the rafter hook on it. That’s heavy enough to be stable for contact nailing and light enough for sequential nailing. It also helps that the gun has a nonslip rubber grip and its weight is balanced. Then the nailer lets you choose between the two functions so you can drive nails one at a time or bump the gun along in a hurry.

Sometimes you might need to adjust your work for a particular kind of wood. That’s why the NR83A5 has a tool-less depth adjustment dial. And it drives a range of nail sizes, from 2 to 3-1/4-inches long.

To save time, the steel magazine holds two strips of plastic collated nails at once. And the magazine is sturdy enough to withstand drops, too.

Next, the claw tip of the nailer is made of hardened steel to stand up to years of hard work. It also grips the wood, so you get the nail in the right place without slippage. And it has an open nose design to help you clear jams easily. But don’t use this tip on finished wood surfaces because it will scratch them.

Finally, the nailer comes with a ¼-inch fitting factory-installed. And it requires 70-120 psi to operate properly. But the cylinder valve drive system can handle dust and grime without hiccups because it self-cleans as you use it. 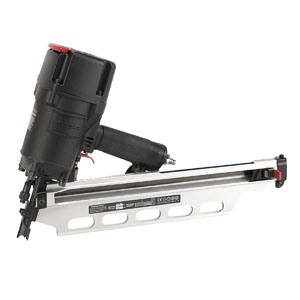 If you’re looking for an inexpensive framing nailer for small jobs, try the AeroPro 9021NS. It differs from the Hitachi nail gun on a few points. For one, it weighs less, but that’s due to the aluminum magazine. Next, it arrives with a 3/8-inch fitting and requires a higher minimum air pressure to operate. And it comes with a shorter warranty, too.

Specifically, the AeroPro has a 1-year limited warranty compared to Hitachi’s 5-year coverage. And the minimum air pressure you can use is 80 to 120psi. On the plus side, the moving cylinder engine reduces recoil, making the gun a little easier to control if you’re unfamiliar with this kind of tool.

Of course, you can choose between single actuation (driving one nail at a time) or bump-firing one with each contact of the nailer on wood. And the open nose design takes some of the pain out of clearing a jam.

In conclusion, the 9021NS shoots plastic collated 21-degree nails that measure from 2 to 3-1/2-inches long. That includes screw shank nails as well. And the magazine holds seventy at a time.

Professional contractors will probably prefer the Hitachi NR83A5 over the AeroPro 9021NS due to a few factors. One is that Hitachi brand is well-established in the power tool market and their nailers are often seen at job sites. Next, they offer a long warranty. And finally, the steel magazine and simple cylinder valve design are tolerant of abuse.

On the other hand, AeroPro is a little lighter in weight and can handle longer nails with screw shanks. It’s a good choice for homeowners who want to build a deck or frame an unfinished basement.