Which one of these DEWALT miter saw kits will give you the most value for your money? Both of them are hybrids, built to run on electricity as well as the FLEXVOLT battery system. Let’s review them both to see which one is best for you. 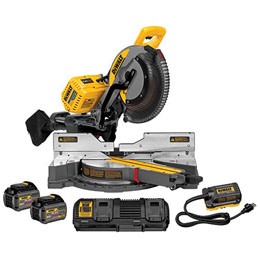 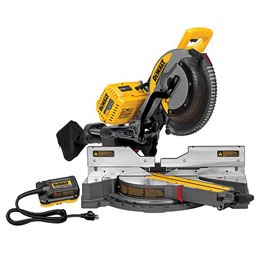 The DEWALT DHS790AT2 miter saw kit comes with everything you need to start working right away. It includes the AC adapter so the tool can operate on electricity as well as twin battery packs and their charger. The batteries are part of the FLEXVOLT system which we’ll discuss right now.

FLEXVOLT is very handy because it lets you plug its 60V packs into 20V tools, giving them up to four timestheir usual runtime. The batteries automatically switch voltages to suit the tool. In summary, if you have any of DEWALT’s 20V MAX power tools, like a drill or driver, you can use the FLEXVOLT batteries in them as well as with the miter saw. But you will need both of the 60V packs to run the DHS790 as a cordless saw.

Now are you wondering if a cordless miter saw is powerful enough for your needs? Let’s review its specifications to see.

To begin, the DHS790 has a brushless motor that works cooler and more efficiently than a brushed motor can. It squeezes every bit of power out of the batteries to get between289 and 310 crosscuts in 3-1/4-inch baseboard on a single charge. And it spins the blade up to 3800rpm, fast enough to slice through hardwoods with ease.

Overall, the DHS790 can miter up to 60 degrees right or 50 left. And the sliding fence will support 7-1/2-inch tall crown molding in a nested position, or base molding up to 6-3/4-inches in height.

It’s easy enough to set the correct angles for your cuts because both the miter and bevel scales are well-marked and easy to read. The bevel lock and scale are located at the rear of the saw while the miter scale and lock are on the front. Both scales have detents at commonly used angles.

How can you be sure you’ve set everything up for an accurate cut? The DHS790 has a built-in cutline blade positioning system that will show you where the blade will pass. It’s not a laser system. Instead, it uses two LED lights on either side of the blade to cast a shadow on the material you’ll cut. It reveals both the position of the blade as well as the width of the kerf if you bring the blade down close enough.

Finally, while you work, you can use the included dust bag for debris collection or attach a dust extractor to the rear of the saw. As you can see, the DHS790AT2 kit is ready to go right out of the box.

Why might you choose the DHS790AB kit instead of the DHS790AT2 kit described above? The AB kit lacks the FLEXVOLT batteries and charger, but is otherwise the same saw. You could test the miter saw by running it on electricity, perhaps saving some money in the process.

If you want maximum flexibility to work on any job site whether or not it has power, get the DEWALT DHS790AT2 kit with the batteries, charger, and AC adapter. Otherwise, you might pay less for the bare tool DHS790AB kit.