As an Amazon Associate I earn from qualifying purchases.
Home
Circular Saw Reviews
Makita 5477NB vs 5008MGA vs 5740NB vs 5007FA Review

Circular saws are an excellent tool to have on hand. They are very versatile because they can rip and crosscut a variety of materials, from plywood to engineered lumber. But if you want to get into the fine details of which kind of circular saw is better, then this review is for you.

There are two main types of gearing systems in the four Makita circular saws we’ll cover today. One kind is hypoid, and the other is worm drive. As we discuss the features of each saw, we’ll go over the benefits of each version. 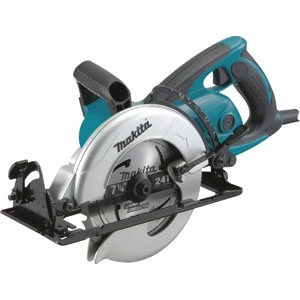 The Makita 5477NB circular saw has a hypoid gear system. A hypoid gearing system has axes that are offset, or in other words, it has helical-shaped spiral bevel gears that aren’t aligned with the meshing gears. As a result, they have a large surface with multiple points of contact. And that’s good news when it comes to high power demands.

As a plus, hypoid gears are quieter than worm drives, and they are very durable. They have a sealed motor system that means the end-user won’t have to change the oil. The 15Amp motor on the Makita 5477NB has ball-bearing construction, too. And if you add that to the fact that the gears are hardened steel, the math says you’ll get a durable saw with a lot of torque.

If you need to cut rafters and trusses, you’ll appreciate the way the 5477NB bevels all the way to 51.5 degrees. It also has a positive stop at 45 degrees.

When the saw is performing a vertical cut, it can go as deep as 2-3/8-inches. But when beveled to 45 degrees, it’s limited to 1-3/4-inches. Then at 50 degrees, this amount decreases to 1-9/16-inches. But with a no-load speed of 4500rpm, it quickly slices through engineered lumber.

As you make adjustments on the saw, you’ll notice that it has large levers that let you work while wearing gloves. There’s also a lower guard that helps you stay on track when you make angled cuts. And the base plate is rugged enough to resist warping and rusting.

In conclusion, Makita included user-friendly features like a rubberized grip and a ten-foot-long power cord. Also, the blade wrench stores on board, so it’s available when you need it. 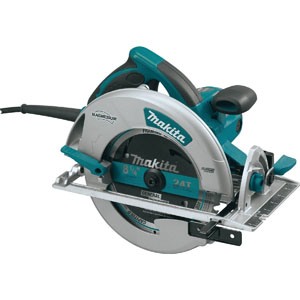 Another difference is invisible, but important all the same. It’s the fact that the 5008MGA has a magnesium housing that makes it considerably lighter than the 5477NB. But there’s no difference in durability because the 5008MGA is tough enough to survive job site abuse.

Like the other saw, the 5008MGA has a 15Amp motor, but with a higher no-load speed of 5200rpm. It also has a larger cutting capacity up to three inches deep at 90 degrees. And it’s safer and more efficient because it has an electric brake to halt the blade when you release the trigger.

Since this is a pro’s tool, you’ll be glad to know that the motor brushes are placed where it’s easy to check and change them.

While the 5008MGA only bevels to 50 degrees, it has an additional positive stop at 22.5 degrees, not just at 45 degrees. Plus, the built-in LED lights, and built-in dust blower will help you stay on course as you cut.

All these features indicate that the 5008MGA is a serious tool for hard-working carpenters and contractors who work with I-Joists, LVL, and other engineered lumbers, plus structural panels like Advantech. With this saw, you can plunge cut, pocket cut, and even cut masonry and metal with the right blades. 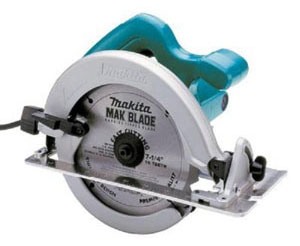 The 5740NB is an older circular saw that Makita has discontinued. It’s not as powerful as the previous two saws we reviewed so far, but it might be all you need for your next project.

That motor operates at 84dB, which isn’t as loud as some circular saws get. And the thick aluminum wraparound base plate has ruler markings to help you cut accurately.

Next, it comes with a MAK blade with a thin edge, or kerf, that makes precise cuts. You can bevel the blade up to 45 degrees for a maximum cutting depth of 1-5/8-inches. Or, in a vertical position, the saw can cut down to 2-1/2-inches deep.

On the downside, there’s no rubbery nonslip grip on the handle. There’s no secondary handle, either. And the lever to adjust the bevel is smaller than those on the previous two saws.

Finally, when you purchase a discontinued model, there is a pro and a con to take into account. While you might find the saw at a low price, you might have difficulty buying replacement parts. 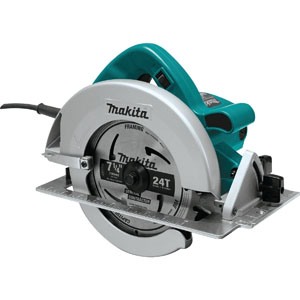 Although the 5007FA looks a little like the discontinued 5740NB, it’s still in production at Makita’s factory. And it has a lot of power even it’s not as pretty as the 5008MGA. It’s recommended for masons, siding contracts, framers, and other builders because of its well-balanced format.

Let’s begin with the 15Amp motor that delivers 5800rpm for cutting hardwoods and difficult materials. The motor has ball-bearing construction with efficient cooling, and it’s double-insulated against dust and moisture. Plus, it has an electric brake that stops the blade’s spin right after you release the trigger. That way you can safely move on to the next cut without delay.

While you work, there are two features that improve visibility. One is the dust blower. And the other is bright illumination from the dual LED lights.

The maximum cutting capacity of the 5007FA is 2-3/8-inches at 90 degrees, and 1-3/4-inches when the blade is beveled to 45 degrees. There is a lower guard that helps when you need to make bevel cuts. And the heavy-gauge aluminum base is also useful when you need to keep the saw on track.

If you’re a professional or a do-it-yourselfer who wants the best tool for the job, the Makita 5008MGA is the best all-around choice. It’s one of the lightest saws in our review, and it’s loaded with valuable features. We loved the high-speed motor with the electric brake, the extra positive stop for beveling, the biggest cutting capacity, and the integrated lights and dust blower. It’s a top quality circular saw, and it also comes with a longer guarantee.

The 5477NB with the hypoid drive is also a pro’s saw. It’s powerful, with the widest beveling capacity, too. But it’s also quite heavy.

The next choice for pros or homeowners would be the 5007FA. It doesn’t appear to come with many frills, but it has both a dust blower and LED lights. And its top speed beats that of the 5008MGA.

Finally, you might find the 5740NB sold at a discount because it’s been discontinued by Makita. As a result, you might get a deal on this contractor special of yesteryear. But stock up now on compatible blades and parts in case they become scarce in the future.

Click here to Check out Makita 5477NB Price on Amazon!

Click here to Check out Makita 5008MGA Price on Amazon!

Click here to Check out Makita 5740NB Price on Amazon!

Click here to Check out Makita 5007FA Price on Amazon!