A contractor-grade miter saw is an important investment. And Bosch and Makita are well-known names in the power tool trade. So how can you choose between these two saws? Let’s examine them both to see which best fits your needs. 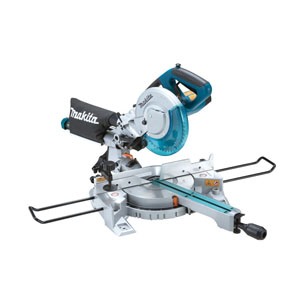 First off, the Makita LS0815F is sliding compound miter saw with an 8-1/2-inch blade. It’s lightweight for such a tool, tipping the scales at a hair over 31 pounds. That’s good news when you need to carry it with you to a job.

The benefit to a sliding compound miter saw like this one is its ability to do more than just crosscut. It can make miter and bevel cuts as well as compound cuts that combine both types. If you make furniture, install baseboards and molding, or even build picture frames, this is the right kind of saw for you.

The Makita LS0815F is handy because it has a larger cut capacity than some saws in its class. For example, it can do a 3-inch deep vertical cut, and slice across a foot of board. It can also handle 8-1/2-inches in width with the blade angled to 45 degrees.

The 10.5amp direct-drive motor has plenty of power to make quick work of hardwoods, especially since it spins the blade up to 5000rpm. And in case you’re wondering if direct drive matters, consider the fact that there are no belts to replace. There’s also an electric brake that halts the blade right after you release the trigger.

Finally, the accuracy of your cuts will be aided by three factors. One is the LED light system that reveals the line of cut. And the second is the linear ball-bearing system that keeps the blade on track as you move it. The third is the rock-solid fence combined with the locking mechanisms for the bevel and miter cuts. 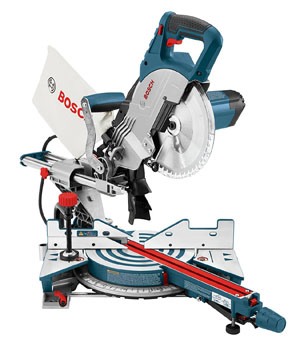 What are the main differences between the Makita LS0815F and the CM8S from Bosch? First, the 12amp motor spins the blade at a top speed of 5600rpm, a little faster than the Makita. But the Bosch saw weighs a little more at 37 pounds. But the carrying handle right on the top is convenient for transporting it.

Next, the CM8S has a slightly greater crosscut capacity at 12-1/4-inches, the same as many 10-inch miter saws. When beveled to 45 degrees, it can handle 8-inch wide materials. And of course, you can also cut 3-1/2-inch crown molding if it’s nested against the fence.

When you want to cut long materials, just pull out the extensions up to 29 inches on either side of the saw. And you may find that the bevel controls are both easy and safe to use. The turret stops and lock lever are both located on the side of the saw, not behind or underneath the blade.

Finally, the CMS8 can bevel from -2 to 47 degrees to the left only, but it can miter up to 52 degrees left or 60 degrees to the right. That’s a little limited compared to the Makita LS0815F, but not a deal breaker if you don’t need to do a lot of compound cuts.

If you perform compound cuts as a matter of business, you may prefer the Makita LS0815F as it bevels and miters to both sides. It’s also a few pounds lighter than the Bosch CMS8.

On the other hand, you may prefer the controls on the Bosch since they are easier to access. And the carrying handle on top is a pleasing feature when you need to move the saw.