Plunge routers are ideal for grooves, mortises, and through cuts for cabinetry, making doors, and fine woodworking. They will give you control over vertical movement in a way that other routers can’t. Let’s review two popular plunge routers from Makita to see which one is best for your work. 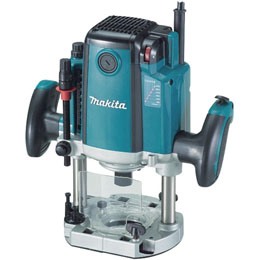 The Makita RP2301FC has a powerful 3.25hp motor with variable speed control and electronic soft start. It has linear ball bearings for better plunge action. As a result, users have described using this router as very smooth, soft, and easy.

The RP2301FC has built-in twin LED lights, but they only work while the motor is running, then for a few seconds after you turn it off. But the twin handles on either side make for a good grip, and the trigger is integrated into one of them, along with a trigger lock. Meanwhile, the variable speed selector dial is located on the same side as the trigger, but near the top of the motor pack.

The motor offers a range of speeds between 9,000 to 22,000rpm, perfect for routing with a wide range of bits and in a wide range of materials. It has a maximum 2-3/4-inch plunge depth as well. And when you release the trigger, the electric brake stops the bit almost immediately.

When you want to set a depth, the RP2301FC has a quick release depth adjustment with three presets along with micro-adjustments. And when you want to swap a bit, this router has a shaft lock so you only need one wrench. Just flip it over onto its flat top and make the change. 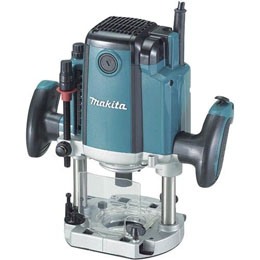 The Makita RP1800 is a single speed plunge router, perfect if your job doesn’t require routing a lot of different materials. Its only speed is a swift 22.000rpm, fast enough to handle hardwoods without breaking a sweat.

Like the other router above, this one has a maximum plunge depth of 2-3/4-inches. Its oversized linear ball bearings make for soft and smooth plunge action. And it’s easy to set the depth with the quick release depth adjustment. It has three presets plus it allows for micro-adjustments.

Controlling the router is a pleasure not just because it moves easily up and down, but also because the ergonomic over-molded handles make for a nice grip. The right side has the two-finger trigger with a trigger lock to rest your hands on a big job.

When you want to change a bit, Makita makes it easier with a shaft lock so you don’t need to use two wrenches. The top of the motor pack is flat, too, so you can easily up-end the router and rest it while you make the swap.

Finally, just like on the RP2301FC, the RP1800 has a built-in transparent chip deflector that keeps debris from flying in your direction while you work.

You can’t beat a plunge router when you have exacting projects that require grooves and mortises all cut to the perfect depth. These types of perfection-demanding tasks require a router with electronic soft start for maximum control as well. You’ll also want the ability to make micro-adjustments. Both of these Makita routers are very capable and powerful for this kind of work. They weigh the same and have the same build and measurements, and they come with the same accessories. There’s really only two differences between them.

If you want a single speed plunge router with plenty of power for hardwoods, get the Makita RP1800.

If you want a variable speed plunge router, get the Makita RP2301FC. It has the added benefit of twin LED work lights.