Don’t pull out the ladder to trim branches. Use a Remington pole saw instead. These two 10-inch chain saws are lightweight and very handy. But since they are so alike, how can you choose between them? Let’s look at both models to see which one will be the best for you. 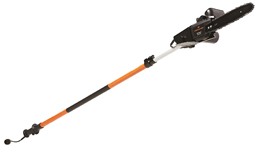 The Remington Ranger RM1025P is the earlier model pole saw, while the RM1025SPS is a newer edition with some improvements. But either way, with this original 10-inch electric chainsaw on a pole, you can reach up to 15 feet in height. That’s ideal for keeping trees and bushes neatly trimmed. You can save money by not having to hire a service for occasional pruning.

The telescoping aluminum pole and saw together weigh around 12 pounds. This is lightweight for a chainsaw, although it may get tiring when used overhead for long periods. Still, it beats hauling out a ladder and balancing on it while you trim branches.

The 8Amp motor and 10-inch bar can cut branches and limbs and even small logs with ease. Then use the flip and lock clamps to quickly detach the saw from the pole. You can do this without tools.

The saw itself has a non-slip grip and a low kickback chain for safety. The pole has an anti-rotation feature to keep the saw from twirling away from where you’re working. That’s important when the pole telescopes out to ten feet in length.

Since the RM1025P isn’t self-oiling, you’ll need to remember to squeeze the bulb before tackling each new limb. This puts oil on the chain so that the saw operates properly. Instead of typical chainsaw bar oil, this tool uses regular motor oil. The specifics on what to use are listed in the owner’s manual that comes in the box.

Some users have commented that the oiler on this saw tends to leak. But this problem appears to be fixed in the RM1025SPS Ranger model described below.

The Remington Ranger RM1025SPS appears to have resolved the leaky oiler problem sometimes seen on the RM1025P model saw. Of course, any chainsaw might leak a little oil when stored. Remington reminds owners to expect that to happen.

Another couple of differences between the RM1025SPS and the RM1025P are the new design of the hand guard and the new style of trigger on the pole. But the easy release clamps are still present. So are other safety features like the non-slip grip on the saw, the low kickback chain, and the anti-rotation protection on the pole.

Like the older model pole saw, the RM1025SPS has a ten-inch bar sized to slice up small and medium-size limbs and logs. For overhead pruning, mount the chainsaw on the aluminum pole that telescopes out to 10 feet in length. This makes it possible to trim branches as high as 15 feet off the ground.

Once the limbs are cut down, it’s easy to flip open the clamps and detach the chainsaw from the pole. Then you can cut up the fallen branches into smaller pieces for firewood or disposal.

To maintain the RM1025SPS chainsaw, you’ll need to put oil in it. Before each big cut, squeeze the bulb to apply oil to the chain. It’s not a self-oiling chainsaw, so it’s important to remember this step to keep the saw in top condition. But since it uses regular motor oil for lubrication, you won’t need to spend a lot of money on special products to care for it.

These two Ranger pole saws from Remington are similar in their size, capabilities, and weight. There are few differences between them, but those dissimilarities may be what help you select one.

The older model RM1025P had a reputation for a leaky oiler, but you might be able to find this saw at a better price.

The newer RM1025SPS has an improved oiler and a new trigger and hand guard. You may prefer this new design over the old one.