Do you need an extra pair of hands? How about a workbench, a vise grip, and a machine press? Now what if all of these came in one portable package? It exists and it’s called a JawHorse. Let’s look at these two workstations made by Rockwell Tools and see which one is best for you. 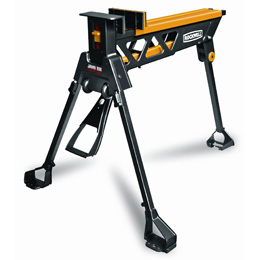 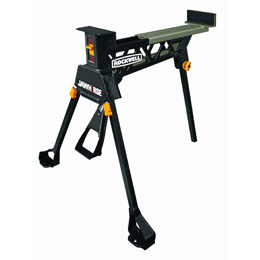 The RK9003 JawHorse is a rock-solid three-legged workstation that sets up and folds down in under a minute. Pumping the foot pedal closes the jaw on the material you want held in place. You don’t even need to use your hands. The JawHorse has up to one metric ton (over 2200 pounds) of clamping force. That means it really grips tight, so be careful with delicate work-pieces! At least the jaws have rubber no-mar-surfaces.

The workstation can support up to 600 pounds of weight. The frame is all steel. As a result, it weighs 43 pounds, so its little roller wheel comes in handy if you prefer to tow it behind you instead of carry it in your hands.

The jaws open up to a maximum width of 37 inches, enough to fit a standard house door. They close down to zero inches. It stands 34 inches tall, a little higher than some dining room tables. When it is folded up for storage, it measures 29 by 14 by 13 inches.

More features of the RK9003 JawHorse

Next we have the RK9002, also known as the Sheetmaster. It’s called that because it can hold an entire sheet of plywood in its jaws, which open up to 49 inches wide. That’s a foot more than the RK9003.

But let’s look at their similarities first. The Sheetmaster has a metric ton of clamping force just like the RK9003, and it can support up to 600 pounds of weight. It has all-steel construction. The jaws close when the user pumps the foot pedal, making it possible to hold the work-piece in both hands while it is being secured. The jaws also haveno-mar rubber grips.

Now, for the differences: The Sheetmaster is ten pounds heavier than the RK9003 JawHorse. Thankfully, the folks at Rockwell put two urethane wheels on the frameso it travels a lot easier than the RK9003 does with its one little roller. The Sheetmaster is taller than the other JawHorse. It stands 35 inches high, which will really help your back if you’re tall. You won’t be leaning down as much. When folded, it takes up more space, measuring 35 by 15 by 13-3/4 inches. Finally, all three feet are wider for more stability. The rear foot serves as a handle to pull the Sheetmaster along on its wheels.

Both of these workstations have good reputations, good reviews, sturdy construction, and they can be used for multiple purposes. Either one may be just what you need to streamline your workshop or to finish a project alone.

The Sheetmaster also stands one inch taller than the JawHorse, which could make it a little more comfortable if you’re taller. It also takes up more floor space, in case that impacts your workspace.

If weight or storage size are concerns for you, the JawHorse RK9003 is smaller when folded and lighter to lift. But it only has a simple roller, not two wheels like the Sheetmaster. This makes it a little unwieldy to manage at times. But at least it rolls and you don’t have to carry it.