Jigsaws are an essential power tool if you want to cut curves and pockets. And many jigsaws can handle bevel cuts, too. But when you look at the wide variety of models on the market, it can be a little overwhelming. Let’s take a closer look at three popular jigsaws from DEWALT and Bosch to see which one will be the best for you. 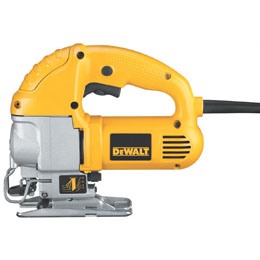 The DEWALT DW317 has a loyal fan following because it’s a solid performer that gets the job done fast. It’s sturdy and heavy-duty,weighing 6.2 pounds, so it stays in place as it works.

The 5.5Amp motor powers the blade up to 3100 strokes per minute, enabling the saw to handle a variety of projects. Plus, the blade guide bearings protect the blade from breaking and keep it on track for smooth cuts. Finally, it’s fast and easy to swap the T-shank blades with the keyless blade clamp.

Take a look at the variable speed trigger and you’ll see it contains a speed control knob. There’s a trigger lock nearby on the handle. This means that with only one hand you can choose a different setting, or lock on the saw so you don’t have to press the trigger the whole time.

There are also four different blade actions: straight up and down with a 1-inch stroke length, plus three orbital modes. Level three is the most aggressive elliptical motion, helping you cut faster through tough materials. You can change the blade action when the saw if powered off by adjusting the level located under the motor.

If you want to perform a bevel cut, the DW317 angles its blade up to 45 degrees. But you’ll need a flat blade screwdriver to adjust the angle and tighten the screw.

Some owners have commented on the steel guide plate that rests on the surface being cut. They’ve expressed concern that there isn’t a no-mar cover plate to protect delicate surfaces from scratching. But you can reverse the base plate 180 degrees to cut thin and narrow materials.

One last feature we liked about the DEWALT DW317 is its handle. There is room to use the saw while wearing gloves, although it won’t be easy to manipulate the speed control. And you can also control the saw with two hands, due to the additional ergonomic grip on the front. 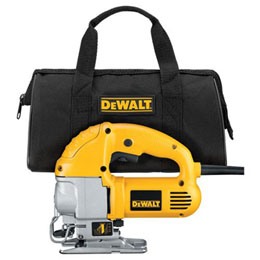 Why would you prefer the DEWALT DW317K over the regular DW317? There’s only one difference. It’s the storage bag. The “K” in the model number stands for “kit.” DEWALT simply includes a zippered nylon carrying bag in this kit instead of just the bare tool saw. 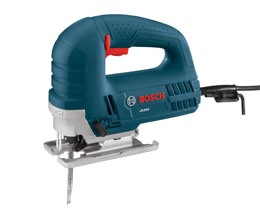 Like the DEWALT DW317, the Bosch JS260 top handle jigsaw has a variable speed control dial embedded in its trigger. There is also an ambidextrous lock-on button so you don’t need to squeeze the trigger the whole time. This saves your hand from fatigue on long cuts.

Also like the DEWALT, the Bosch has a tool-less blade change system. It’s a quick-release clamp operated with a lever. This is really handy when you need to swap out a hot blade.

Of course, there are four orbital action settings, from straight up and down to a powerful elliptical stroke for chewing through hardwoods. It’s simple to change the orbital action with the knob on the side of the saw. It’s easier to reach than the lever underneath the DW317.

But there are also differences between this jigsaw and DEWALT’s model. And these differences are real crowd pleasers.

For one, the Bosch JS260 has a nine-foot-long power cord. That’s extra-long and extra handy when you want to avoid using an extension cord.

Second, you can change the angle of the blade for beveling. But instead of digging up a screwdriver from your tool box, you have the blade wrench stored right on the power cord.

Third, the JS260 has a built-in adjustable dust blower. It’s always on, keeping your line of sight clear of debris.

Fourth, it has a 6.0Amp motor with a low-vibration design and a precision-machined plunging mechanism for smooth and accurate cuts.

Yet another feature that draws pro woodworkers to this jigsaw is that it comes with a no-mar overshoe for the steel base plate. This is extremely useful when cutting finished woods or delicate materials. There is also an anti-splinter insert included in the box.

In the end, although the Bosch is a heavier, larger jigsaw, it comes with a lot of extras that make it better for woodworkers who do detailed work.

If you want a lighter, more compact jigsaw, consider getting the DEWALT DW317 or DW317K. The difference between them comes down to whether you want a carrying bag or not. You’ll have the convenience of quick blade changes, the ability to perform bevel cuts, and the power of four different orbital actions. But if you need to frequently change either the orbital action or the bevel angle, consider going with the Bosch JS260.

If you do a lot of fine woodworking, you may prefer the Bosch JS260 over the DEWALT DW317. It has several features that make using a jigsaw a lot easier, including a dust blower. Its controls are easier to access, you won’t need additional tools to make adjustments, plus the Bosch comes with protections like an anti-splinter insert and an overshoe for the foot plate.