These two sidewinder circular saws from DEWALT are professional tools that will work hard to help you get the job done. But how do you decide between two saws that seem quite similar on the surface? We’ll take a closer look to help you choose the best one. 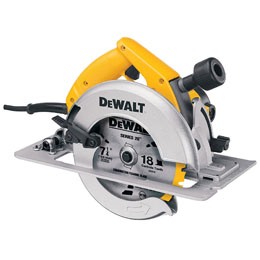 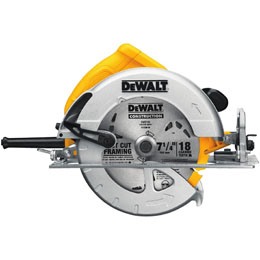 The DEWALT DW364 has two unique features. The first is that it drops the front part of its footplate instead of the back. This is due to the ball hinge in the rear of the saw. This design’s purpose is to keep your hand behind the tool no matter the depth of cut.

The second standout feature is the front handle. It’s also the blade depth adjustment knob. With the built-in scale, you won’t need a tape measure to set the depth you want, and you don’t need to take your hand off the handle. Some users love the convenience, but others complain that the bulky knob blocks the line of sight.

As you work, the 15Amp 2075MWO motor powers through tough materials. The top blade speed is 5800rpm when it’s not under load. And there’s an electric brake that halts the blade when you release the trigger. That’s good news for safety and for protecting your work piece from damage.

Also with reference to protecting what you cut if it’s a finished piece—the rigid aluminum base is very durable, but DEWALT doesn’t include a no-mar overshoe in the box. But there is a 1-1/2-inch space between the end of the shoe and the blade so that matches the thickness of dimensional lumber.

The DWE575 circular saw is much lighter than the DW364. It weighs only 8.8 pounds, but it has almost as much power as the other saw above. Its 15Amp motor spins the blade up to 5200rpm and has 1950MWO of power. Because of its light weight and power, DEWALT recommends the DWE575 for tasks like cutting dimensional lumber and plywood for framing, and aluminum siding, too.

There are also several features to help you make precision cuts. First, it has an integrated dust blower to keep the line of sight clear. Then, its rigid and durable aluminum shoe has an anti-snag ball-bearing lower guard so the saw moves smoothly over the workpiece.

Finally, there’s one more detail we appreciated in the DWE575. It has DEWALT’s ToughCord system that prevents pullouts and short-circuits from damage to the power cable.

Each one of these two circular saws has unique benefits. The DW364 has a combination depth adjustment knob/front handle, and it drops its shoe in the front, not the rear. It’s a powerful saw that can handle cutting mild metal as well as wood. If you don’t mind the unusual handle, you might like that you don’t need to move your hand in front of the saw to adjust the depth of cut.

On the other hand, the DWE575 is just about as powerful, but noticeably lighter by a few pounds. It has an integrated dust blower, a ToughCord power cable, a more conventional handle, and it bevels a few degrees farther than the DW364. In fact, it has convenient detents at the most common angles like 45, something the DW364 lacks.