How important is the gearing inside your circular saw? The debate rages between worm and hypoid drives. Some say worm drive is superior because the user can change the oil and keep the motor in top shape. They say that the typical worm drive last for years. The DEWALT DWS535 seems to prove that point quite well.

Hypoid drive fans prefer their kind of gear because it’s sealed. There is never a need to add oil to the motor or change it. And the gears are better at transferring power since they are made with closer tolerances. With that kind of build, you may find that the Makita 5377MG suits your work style better.

Either way, these two circular saws from Makita and DEWALT are gracing a lot of wish lists this year. Let’s take a closer look at them both. Which one will you take home? 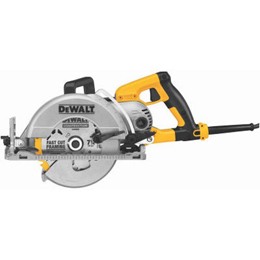 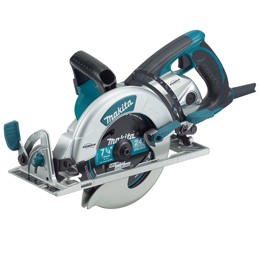 The DEWALT DWS535 circular saw features a dependable worm drive in its motor. The drive allows it to reach 4800rpm under no load. And the worm drive is ideal when you need to make long, straight rips. It’s easier to control than a sidewinder, and plenty powerful enough for cutting framing lumber.

Much of the saw is built from rugged, durable magnesium. This makes it a lot lighter than it would be if it were made of steel. The footplate of the DWS535 saw is cast magnesium, resistant to dents, scratches, and drops.

Speaking of durability, the DWS535 circular saw also has DEWALT’s “Toughcord” protection system. The power cord is reinforced to be four times stronger than ordinary cords against jerks and yanks.That’s useful when you don’t want downtime on the job.

Finally, this circular saw is built to be comfortable to use. It has both a top handle grip and a pistol grip. The trigger guard is large enough that you can wear gloves while you’re working. Overall, lots of users recommend the DWS535 because it cuts smoothly without binding. They appreciate its power on tough jobs.

The Makita 5377MG circular saw has a hypoid gear drive in its motor. You’ll never need to add oil or change the oil on this tool. This kind of gearing as well as the magnesium body of the saw makes it lightweight. The 5377MG only weighs 13.2 pounds, 6 ounces less than the DEWALT DWS535.

But just because it’s not heavy doesn’t mean it’s not a beast. The Makita saw is designed for cutting all sorts of lumber, from dimensional to plywood and particle board. You can also cut some types of metal and masonry with it.

The 15Amp motor and the hypoid gears speed up to 4500rpm. The saw can rip through 2-3/8-inch material at 90-degrees, and bevel up to 51.5 degrees. There are positive stops at 22.5 and 45 degrees as well. Those specs are a hair less than what the DEWALT DWS535 can provide, but the Makita isn’t an inferior tool.

In fact, Makita has a reputation for solid construction and design. Many users report that this is one of the most stable circular saws they’ve experienced. They like its soft start and quiet operation as well as its clean cut.

If you like the idea of never having to top off or change the oil in your saw’s motor, take a look at the Makita 5377MG. It’s lightweight and makes smooth cuts.

If you want the most power and flexibility, and it doesn’t matter if you need to maintain the motor, look at the DEWALT DWS535. It has a little more power and a wider bevel range than the Makita.