As an Amazon Associate I earn from qualifying purchases.
Home
3D Printer Reviews
MakerGear M2 vs Ultimaker 2 vs Replicator 2 Review

The future has arrived. Now it is possible to make tools, toys, jewelry, food, and even limbs for wounded people right in your living room. 3D printing is accessible for ordinary people using home computers. Let’s look at these three 3D printers to see which is the best fit for your future projects. 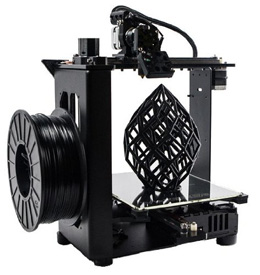 MakerGear has been manufacturing 3D printers since 2009. This M2 is their third generation printer.It won the 2015 Enthusiast Award from 3DHubs and it has lots of positive reviews online.

There’s noplywood boxlike those used to encase some earlier 3D printers. The M2 looks professional and has a sturdy and open design. It has a black powder-coated steel frame with polished steel shafts and CNC-machined aluminum axes mounts. MakerGear explains that this makes the printer durable and precise. The platform is heated glass with a build area of 8 x 10 x 8 inches. The plastic parts of the M2 are printed in-house by MakerGear.

Not only it is well-built, but it’s also fast. The M2 prints 80 to 300 millimeters per second, depending on settings. Its resolution is .02mm, or 20micron, which is even thinner than a single sheet of paper. With this fine resolution the user rarely has to sand or polish the finished print.

MakerGear supports open design. They don’t lock users into using only their software or filaments. They ship internationally and their power supplies are compatible with world voltages. In the box is everything a user needs to get started right away. They include a USB cable for connecting to a computer, power supply and power cord, the spool holder and screws, tools and miscellaneous packages (complete with grease, screwdrivers and other handy parts), a welcome package, and a spool of 1.75mm PLA filament. Note that there is a LCD control panel sold separately so the user can work without a computer.

Features of the MakerGear M2

The only complaint some users voiced was that they had to buy the software separately if they wanted the Simplify3D program from MakerGear. But this is a tiny complaint considering that the M2 is compatible with open-source free programs. 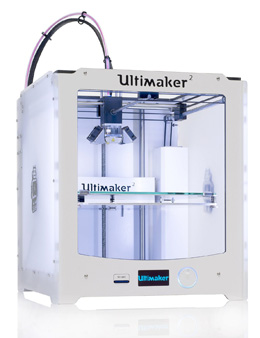 Here’s another award-winning 3D printer. The Ultimaker 2 won the “Best in Shoot-Out Award 2015” in a comparison of 26 printers in MAKE Magazine.

The Ultimaker 2 has many favorable reviews because it’s fast and quiet, easy for beginners to manage, and is just downright good-looking. Users can watch the printer in action because of its LED-lighted build area.

The backlit control panel is a really nice feature that makes it easy to print from an SD card without a computer. It has a helpful first-run setup program to show how the printer works. Ultimaker also offers their own printing software for the PC, called Cura, for free.

The Ultimaker 2 has a 20micron resolution like the M2 and a maximum print speed of 300mm/s. It has a heated glass platform for ABS printing and it can also handle PLA filament.The build area of the Ultimaker 2 is 9 x 8.8 x 8 inches, slightly less than the M2. The bed can be leveled with screws. It has two fans, compared to only one fan on the M2, so prints are less likely to droop or flow when they shouldn’t.

Ultimaker is a company based in the Netherlands and their power supplies are also compatible with world voltages.

More Features of the Ultimaker 2

Reviewers have pointed out that the printer is not completely maintenance-free. The user needs to grease the rods regularly and replace the hot end and PIFE insert after every 500 hours of use. 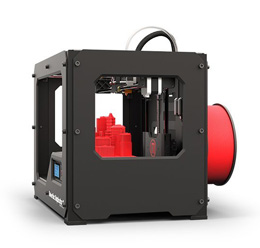 What maker hasn’t heard of MakerBot Industries and the Thingiverse? MakerBot has been in the 3D printing business since 2009. The Replicator 2 came out in 2012 and has been popular ever since. It won “Product of the Year” and “Editor’s Choice: Best 3D Printer” in Popular Mechanics magazine.

Of the three printers reviewed here, the MakerBot Replicator 2 has the largest build area. It’s a spacious 11.2 by 6 by 6.1 inches. It has a 100 micron (0.1mm) resolution but can go finer with the help of MakerWare software. Unlike the other two printers, the Replicator 2 only prints with PLA filament. It has an acrylic print bed that is not heated. Users recommend the use of blue printer tape on the platform to secure prints. The finished prints are easy to remove with the spring-loaded release.

There’s an LCD panel for printing without a computer using the on-board controls and an SD card in the slot. The printer frame is steel to make it stable for precision printing and the panels are made from PVC.

More Features of the MakerBot Replicator 2

If you’re new to the world of 3D printing and want to get started with minimum fuss, hacking, and setup, go with the Ultimaker 2. It has a 12-month warranty, the longest of the three printers featured in this article. It has convenient extras like LED-lighting and an easy-to-use control panel, making it user-friendly and pretty. The dual fans are a bonus for printing overhangs.

If you want to print with both PLA and ABS and don’t care about shiny extras like the LED lighting or a control panel, try the MakerGear M2. It’s got a solid design and reputation and offers a 6-month warranty. It also works well with open software and doesn’t require proprietary filament.

Click here to Check out MakerGear M2 Price on Amazon!

Click here to Check out Ultimaker 2 Price on Amazon!

Click here to Check out Replicator 2 Price on Amazon!