When you’re running pneumatic tools you need consistent air pressure to get the job done right. Makita offers more than just that basic requirement with these two air compressors. They both run quietly enough that you can carry on a conversation without shouting, and they won’t trip your breakers when they start. Let’s look at them both and see which one will be the best choice for you. 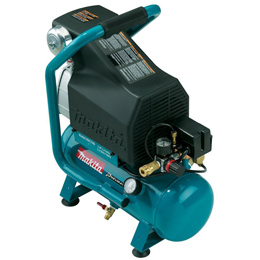 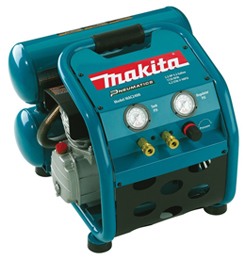 The MAC700 is perfect for the homeowner or independent contractor. It runs one tool at a time with its 2 horsepower motor and 2.6-gallon air tank. It won’t trip the breakers on household electricity because it only draws 12.4amps at startup instead of the full 15amps of a normal home current.

The motor runs at 1720rpm and creates only 80dB of sound. Many users have been pleased that they can listen to music and talk to others with the compressor only a few feet away. But the fact that it has low rpms doesn’t mean it isn’t powerful. It recovers fast so there’s little or no downtime waiting for it to recharge air pressure. The MAC700 puts out 3.3cfm of air at 90psi, plenty for brad and framing nailers. (If you plan to use a ½” impact wrench or sander, you’ll need to look for a different compressor. Also consider that Makita’s maximum recommended duty cycle is 50%–if the compressor is pumping air more than half of every hour, it is undersized for the job you’re doing.)

Makita includes oil and a universal ¼” coupler with the compressor. The MAC700’s pump must be oiled, but it runs cooler as a result. There is a sight glass that shows the oil level so it’s easy to see when it’s time to add more.

The carrying handle forms part of a roll-bar design to protect the compressor. Another nice feature is the lever-handle ball valve tank drain (instead of a petcock)for removing built-up condensation.

If you’re doing flooring or framing with a coworker, this might be the air compressor for you. The MAC2400 can run two tools at a time and it holds 4.2 gallons of air in two cast-iron tanks. It provides 4.2cfm of air at 90psi. This is still not enough for high-power tools like impact wrenches, but plenty for nailers, greasers, and ¼” ratchets. It has a 2.5HP motor that runs quietly (for an air compressor) at 79dB which means it’s possible to have a conversation in the room with the compressor running.

This compressor runs at the same 1720rpm as the MAC700 but it draws a little bit less current at 12.3amps. Lubricated by oil, with copper-finned discharge tubing, it stays just cool enough to touch. It has an oil sight glass so it’s easy to see when it’s time to add more oil, and the cylinder is removable for easier maintenance.

There are no wheels, but there is a carrying handle with a rubber grip. The roll-cage design and rubber feet help protect it from bumps. Makita includes oil and a universal 1/4–inch male coupler so the MAC2400 is ready to go out of the box.

These Makita compressors have lots of happy users because they’re quiet and rarely cause electrical overloads even on household circuits. They aren’t difficult to maintain or use. They’re great for home use or light contractor work.

The MAC700 is better suited for an individual user with lower power needs. It provides 3.3 cubic feet per minute at 90psi, and that’s enough for smaller nailers. Unless you’re a champion nail-driver, it recovers fast enough to keep up with the work you’re doing.

The MAC2400 can be used by one or two people at once, but again it’s not an industrial-grade air compressor. It’s rated for 4.2cfm at 90psi, more than the MAC700, but not enough for impact drivers or tools with high torque. It would be better suited for nailers, grease guns, nibblers, and riveters.