Whether you’re running a paint gun or a nailer, you need an air compressor. When you are working indoors, quieter is definitely better. Let’s look at these two compressors from Rolair and Makita and see which one will be the best for your needs. 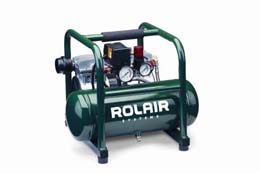 You may not have heard about Rolair. They only make compressors, while Makita is known for a variety of power tools. Even though this air compressor is very user-friendly, Rolair targets professional contractors as their principal customers, and they don’t sell this model in retail stores.

Both the JC10 and the compressor from Makita described below are advertised as having low-speed motors that make little noise. But the JC10 from Rolair is clearly the quietest. It produces just 60 decibels of sound, so it doesn’t interrupt even a conversation. Trim carpenters working indoors love this compressor! It puts out enough air to run two trim guns at once.

Another excellent feature of the JC10 is that it doesn’t need oiling. Most air compressors require the user to put oil in before each use. This model does not, which makes it basically maintenance-free. If it happens to tip over, there’s no oil to spill out. And with no oil, the compressor starts up nicely in cold weather.

The motor is an induction motor with all ball-bearing construction, not a universal motor. This means its lifetime is up to ten times longer. It runs at 1725rpm and draws 8amps while it puts out 1 horsepower, so it can run off an extension cord. There’s also overload protection circuit to keep it from burning out.

Contractors often want to know what the pump-up (initial fill up) and recovery times are because they don’t want to wait on a compressor to catch up with them. The JC10 has a pump-up of less than a minute and a recovery time of just 15 seconds.

Yet another great feature is the solenoid valve that unloads head pressure automatically when the power is disconnected. All these features are excellent for users unfamiliar with compressors. All the details that usually need tending in other compressors are all taken care of in this one. 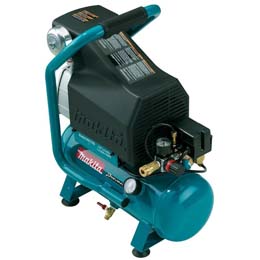 Makita’s compressor is a lot louder than Rolair’s. It operates at 80 decibels. This is still below OSHA’s limit for long-term exposure, and is actually less noisy than similar oiled compressors. As a result, this model has been popular with contractors for about a decade now.

The motor runs at 1730rpm, putting out 2.0 horsepower, double that of the Rolair. The 12.4amp draw is higher on the MAC700. (Note that Makita recommends a minimum circuit of 15amps.) It delivers 3.3cfm at 90psi, and 3.8cfm at 40psi, so it is puts out more air and is more powerful than the Rolair JC10. The cast-iron tank holds 2.6 gallons, a little more than the Rolair.

The MAC700 is unlike the Rolair in that it needs maintenance. It’s the typical compressor with an oil-lubricated pump that needs attention before each use. With the oil, it does run cooler, and that prolongs the lifetime of the motor. If it overheats, it has a thermal overload cutoff to shut it down. It comes with an automotive-style air filter that needs changing every so often.

If your number one priority is a quiet compressor, get the Rolair. The fact that it doesn’t require oiling or maintenance is a big bonus.

If you need power more than silence, get the Makita. It’s still pretty quiet for an oiled compressor, it’s more powerful, and it has lots of happy owners.