You can never have too many rechargeable batteries in this age of cordless tools. A fast charger is also essential. If you’re looking to replace parts that have worn out, or just add more batteries so you never run out, these two battery and charger sets from Ryobi will help you get all of your work done. Let’s look at them both and see which one will be the best for you. 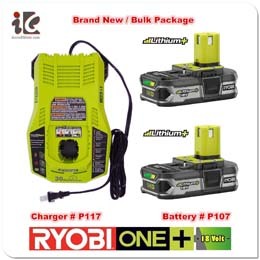 Do you hate waiting for things to recharge? This P117 charger from Ryobi does the job in just an hour, or even as little as 30 minutes. You can refill your tool battery on your lunch break. The P117 is usually sold as part of a battery and charger upgrade package because it’s got more features than the P118 described below.

It’s specifically made for both the Ryobi 18-volt ONE+ Li-ionand Ryobi 18V ONE+ Ni-Cd batteries. Yes, you read that correctly—it charges both types of batteries so you only need one charger.

The circuitry inside does two things: it saves energy so you don’t waste electricity, and it protects the battery cells so they last as long as possible. For example, charging when the battery is too hot or too cold will damage it, shortening its lifetime, or even killing it outright. This charger’s LED lights will warn you ahead of time if the temperature is too extreme.This is something that the P118 charger below does not do.

On the bright side, the two LITHIUM+ batteries included in this kit are quite resistant. They’ll work in the cold down to 14 degrees F, and they can last up to 4 times longer than a Ni-Cd battery of the same voltage.

Another nice feature of this charger(one that we wish all chargers had) is that it reveals if the battery’s capacity has gone down. That way you’ll know in advance if you need to think about buying a new battery to replace it. Of course, it also tells you if the battery is done charging.

Finally, the charger has a “maintenance mode.” If you leave the battery on the charger, it will condition it so it always works as long and hard as possible.

More features of the Ryobi P117 charger and battery pack 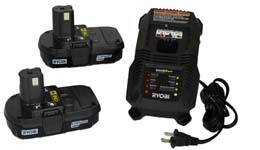 The main differences between this P118 charger and battery pack and the P117 above are their colors, the length of time to complete a charge, and the fact that this charger doesn’t warn about temperature extremes. Ryobi says that this charger fills most batteries in an hour, while the P117 says some batteries are done in just 30 minutes. This P118 is the basic charger included in many of Ryobi’s power tool kits.

Other than those features, the concept is the same. The charger comes with two Li-ion 18V batteries. It also recharges 18-volt Ni-Cd batteries, which is convenient for people transitioning between the older and newer tool lines. It warns if the battery is defective, and has a maintenance mode to keep either kind of battery in top condition. Like the P117, it is energy-efficient.

Finally, a handy feature of the P118 is the cord wrap area around its body. Both it and the included batteries are black in color, so they match just about any power tool collection.

More features of the Ryobi P118 and battery pack

If you already have the P118 black charger and want to upgrade, get the P117. It charges some batteries in just 30 minutes. It also has a better display for indicating the status of the battery, and senses whether it’s too hot or cold to charge. Plus, the bright green color will make it easy to spot so it doesn’t get left behind at a worksite.

If you don’t want the extra features, or you prefer not to have a brilliant green charger and batteries, get the P118. It’s the one-hour basic charger that is often part of Ryobi’s power tool kits, and it has lots of 5-star reviews.